Master thesis and internship with Nestle

We are looking for a motivated student for a Master’s thesis followed by an internship in the development of a microfluidic assay to study plastic biodegradation. The project is a collaboration between our group at ETH Zurich and Dr. Hannah Kleyer (Nestlé Institute of Packaging Sciences) at Nestlé Research Lausanne. You can find more info here.

An important group of unicellular organisms in the oceans are diatoms, ubiquitous photosynthetic eukaryotes. Diatoms are at the base of marine food webs carrying out ~20% of the yearly photosynthesis on Earth[1]. They are responsible for the conversion of large amounts of inorganic carbon into organic matter, serving as food for many other marine organisms.

Based on recent work [2]–[5], we want to use a Digital holographic camera attached to an inverted microscope(available in the lab) to image singular living diatoms in high temporal (on the order of minutes) and spatial resolution (on the order of microns) and investigate the topics listed below. Digital Holography Microscopy (DHM) quantifies the optical path difference of a sample compared to the surrounding media based on refractive index differences and allows the extraction of density and dry mass measurements. Figure 1 shows how QPI allows the measurement and tomographic reconstruction of chloroplasts in a T.rotula cell. The eight chloroplasts (shown in red) are detected based on their refractive index differences compare to the rest of the cell, their volume can be extracted (V_chl) and their 3D position within the cell can be determined.

We aim at developing a new method to visualize and track subcellular structures such as organelles in 3-D in single-cell diatoms. The diatoms might be fixed at the end of a glass capillary, inside a capillary, or rotated by flow to extract a full 3D scan of cells. (see [2]). The target is to image Thalassiosira pseudonana, Thalassiosira rotula, and Ditylum brightwellii.

A prospective student will develop the tomographic imaging setup in the lab, automating the image acquisition and the tomographic reconstruction. By staining different organelles and using fluorescent imaging, we will establish protocols how to image and differentiate the various organelles.

You can do this project as a semester or master thesis. The scope of the project will vary accordingly.

Impact of chemokinesis on bacteria-particle encounters

Processes controlling biogeochemical cycles are characterized by tight interactions between recycling organisms and their substrate and are therefore highly dependent on encounters between the organisms and the substrate. For example, the encounter rate between marine bacteria and sinking particles of organic matter in the ocean is of particular importance for the ocean carbon cycle. Bacteria are responsible for recycling of 50 Gt of particulate organic carbon in the ocean every year, leaving behind only 1% of the particles that sink and reach the oceans’ sediment where they remain buried and stored for millennia. To enhance particle consumption in the ocean, bacteria evolved a sophisticated toolbox, which includes hydrolytic enzymes, attachment appendages and chemokinesis (i.e. the ability of bacteria to increase their swimming speed in response to high nutrient levels). Yet, the ability of bacteria to sense plumes in the wakes of sinking particles that leak organic matter and use them to increase their encounters and therefore the consumption of organic particles requires further investigation (illustration below). 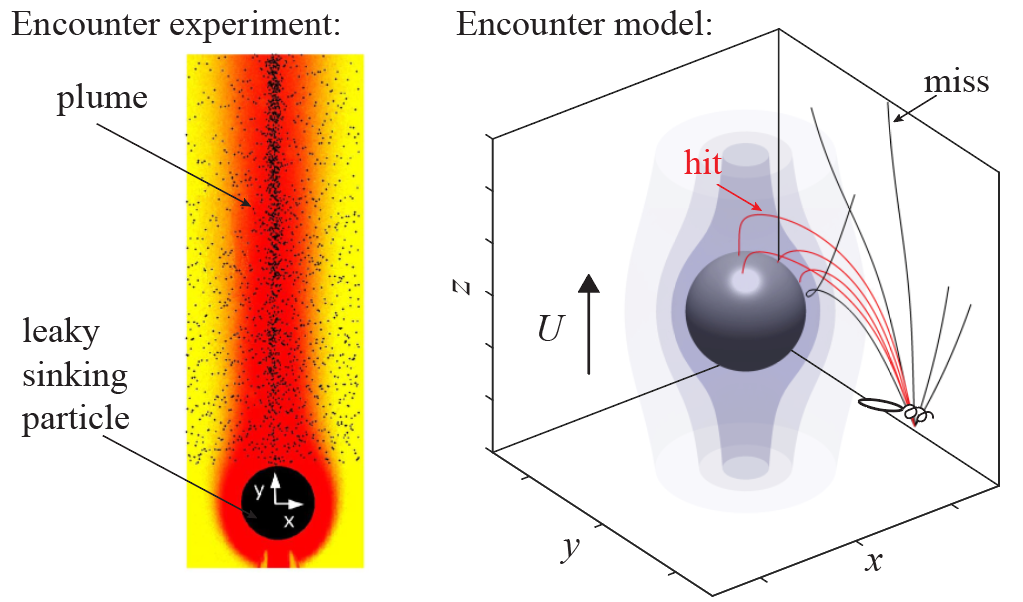 In this thesis, the student will explore the response of bacteria exposed to chemical plumes generated in a controlled manner in a microfluidic device with the goal to evaluate if chemokinetic behavior can increase the encounter rate between bacteria and leaky sinking particles. The student will also use an existing bacteria-particle encounter model to explore the parameter space beyond the experimentally accessible range.

During the project, the student will learn how to culture bacteria, analyze their motile behavior, build microfluidic devices, master imaging techniques, and rationalize experimental observations with a model.

Knowledge of Matlab is recommended but not required.