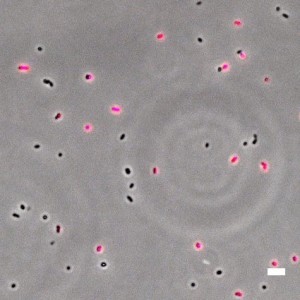 Dimethylsulfoniopropionate (DMSP) produced by phytoplankton in the ocean plays a fundamental role in the global sulfur cycle and climate, mediated by the chemical and behavioral ecology of marine microbes. Bacteria in the ocean break down DMSP via two divergent catabolic pathways: one leads to incorporation of the sulfur into biomass, while the other leads to the expulsion of sulfur from the cell as dimethylsulfide (DMS), which affects climate by promoting cloud formation. Uncovering the factors that inform this decision between the two catabolic pathways is important for understanding the effect of bacterial processes on the global sulfur cycle and climate. Because DMSP is released into seawater as microscale point sources – for example through secretion by phytoplankton – the DMSP concentration experienced by individual bacteria can vary strongly over time, making the choice of pathway potentially concentration-dependent. This small-scale variability could thus be a determinant of the fate of DMSP, and thus, the production and release to the atmosphere of DMS. We have designed and built a multi-color fluorescence reporter system in a model marine bacterium to visualize the relative expression of the two DMSP degradation pathways under different DMSP concentrations. Our approach of combining microfluidics, microscopy, and genetic techniques should allow us to predict how molecular-level responses of microbes to microscale features of the environment can ultimately influence large-scale fluxes of sulfur in the ocean.