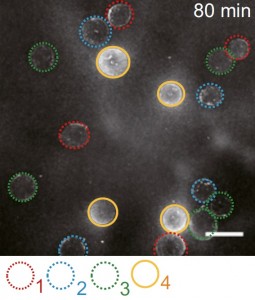 Our paper on optimal foraging by marine bacteria on particles, by Francesco and former postdocs Yutaka Yawata (now at the University of Tsukuba) and Filippo Menolascina (now at the University of Edinburgh), was recently published in PNAS. Patch use theory was originally developed within the framework of optimal foraging theory to understand the macroscale behavior of animals. We show that it provides clear insights into the microscale foraging of bacteria, after accounting for constraints due to the limited information about the environment available to them, as they exploit particles and disperse among them within marine particle seascapes. Congratulations to everyone involved!